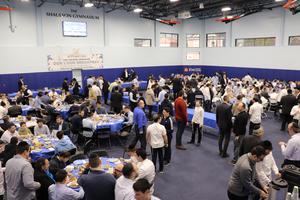 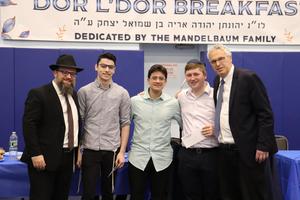 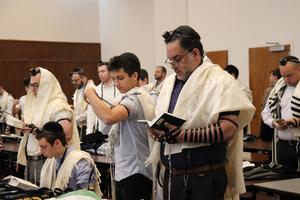 Mesivta Ateres Yaakov held its annual Yonatan Andrusier Dor L’Dor Breakfast last Thursday, during which fathers and grandfathers joined their sons for an enjoyable morning of ruchniyus and gashmiyus at the Mesivta.

The morning began with a warm, leibidik Rosh Chodesh shacharis followed by a lavish, catered breakfast in the Mesivta’s expansive Gymnasium. To begin the program, the Rosh HaYeshiva, Rabbi Mordechai Yaffe, addressed the 400+ fathers and sons in attendance welcoming them and expressing his own personal feelings of hakoras hatov. Senior Eliezer Aziz, representing the Mesivta student body, followed and delivered a heartfelt message about his and his classmates’ growth in learning and the strong connection he and his peers have with their Rabbeim. He concluded by thanking his Rabbeim for their warmth, care and guidance throughout his years at the Mesivta.

The highlight of the breakfast was a visit from Rabbi Moshe Plutchok, Rav of Kehillas Ahavas Yisroel, who shared amazing stories and insights on the sugya of Hakaras HaTov. The program concluded with a raffle organized by the Student Government including a gaming system, a restaurant package, MAY merch and some very happy winners.

Congratulations to our Essay Contest Winners: